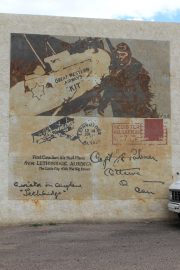 In this mural, Jock Palmer is posing in front of one of his planes and below him is a letter destined to be the first airmail flight from Lethbridge to Ottawa.

Jock Palmer was born in Cambridge, England in 1898 and immigrated to Lethbridge in 1905.   He joined the Canadian Expeditionary Force and served gallantly on the battlefields of France in World War One.  Upon transferring to the Royal Flying Corps, he received his wings and tallied 9 aerial victories.  After the war Jock flew extensively as a barnstormer, commercial pilot and instructor.  Often been described as the “Grandfather” of Alberta Aviation, Jock pursued other ventures beyond flying including the founding of Lethbridge radio station CJOC.

During World War 2, Jock became one of the first flight instructors at the Elementary Flying School in Lethbridge at which time he is believed to have logged the highest number of flying hours of anyone in Canada.