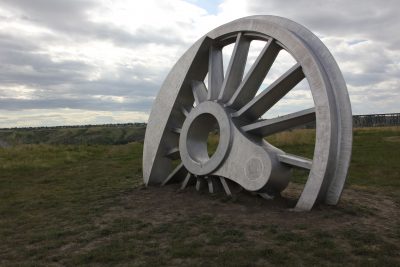 A Departure is based on three types of driver train wheels that have crossed the Alberta CPR High-Level Bridge since 1909. The sculpture components frame views of the bridge, the Oldman River Valley, the Galt Museum, and the University of Lethbridge.  When facing the bridge, you can peer through the spokes of the large wheel to see its older counterpart, as if looking back in time.  When standing between the bridge and the two steam engine wheels, you can see a late twentieth-century wheel appearing to roll into the future.

Commissioned on the 100th Anniversary as a legacy of the Lethbridge Viaduct also known as the High-Level Bridge. Funding for the A Departure Project was provided by the City of Lethbridge Public Art Fund, City of Lethbridge Bridge Celebration Fund and funds from the City’s Heart of Our City Steering Committee.